Title rivals Lewis Hamilton and Max Verstappen are under investigation after Hamilton romped to pole position for the ‘sprint’ qualifying race at the Sao Paulo Grand Prix.

Hamilton’s Mercedes car was referred to the stewards for an alleged technical infringement on its rear wing.

Verstappen is also set to appear in front of stewards on Saturday morning for an alleged breach of the FIA’s International Sporting Code concerning rules on working on the cars after qualifying.

Hamilton, who has a five-place grid penalty for Sunday’s grand prix, was untouchable over one lap, 0.438 seconds quicker than Verstappen.

However, if his car is found not to comply, he will be sent to the back of the sprint grid.

Governing body the FIA said a decision would not be made until Saturday because the stewards were “awaiting further evidence that will not be available until the morning”.

A later statement said Verstappen and a team representative had been summoned to a meeting for an alleged breach of the international sporting code.

Video footage posted by a fan on social media showed Verstappen seemingly checking with his hands the rear wings of his Red Bull and Hamilton’s Mercedes after they had parked up.

Article 2.5.1 of the sporting code states that “no operation, checking, tuning or repair is allowed” in that secure area once the cars have stopped after qualifying unless authorised by officials.

An earlier communique from the stewards said that when Hamilton’s car was checked after the session, it was found that his rear wing did not comply with the rules regarding the maximum gap between two elements of the wing when the DRS overtaking aid was deployed.

The gap was measured to be larger than the maximum permitted distance of 85mm.

The DRS operates the upper flap of the rear wing, lifting it up on the straights on certain parts of the lap to reduce drag and increase straight-line speed. 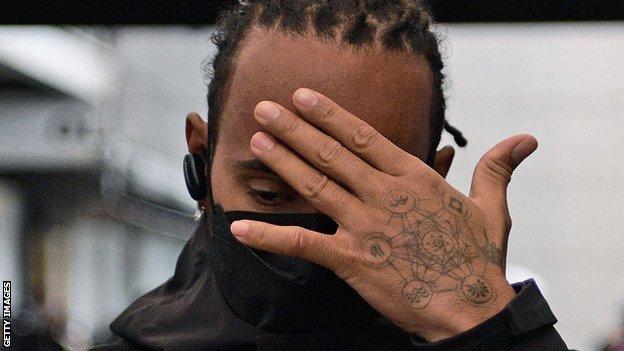 Where did others place?

Behind the front two, Hamilton’s Mercedes team-mate Valtteri Bottas was third, ahead of the second Red Bull of Sergio Perez.

There are three points for the winner of the sprint, the result of which sets the grid for the grand prix.

If he avoids a penalty for the wing issue, Hamilton’s target will be to win the sprint, to earn the three points for victory in that race, and start sixth for Sunday’s grand prix – as high as he can be this weekend.

Verstappen leads Hamilton by 19 points with a maximum of 107 points available over the remaining four races.

The margin of Hamilton’s pace advantage on Friday as the drivers disputed starting positions for Saturday’s ‘sprint’ – a shorter race, about one-third the distance of a grand prix – was something of a surprise after two consecutive victories for Verstappen.

Mercedes were on pole in Mexico last weekend, but that was more down to Red Bull not managing to get their tyres in a good working window rather than any lack of pace. And Verstappen dominated the race.

Hamilton said: “It was a very good qualifying session. I am super happy with it. We have the penalty but we give it everything we’ve got.”

Verstappen said he suspected at least part of it would be explained by his rival’s fresh engine. Mercedes have fitted the fifth engine of the season to Hamilton’s car, two more than are permitted.

“When they take a new engine, they have a bit more power for the weekend so for me it is not a big shock,” Verstappen said. “I am just happy to be second, it is a good position to start from. It is nice to be closer but sometimes you have to be satisfied with what you get.”

Mercedes have been managing a reliability problem with their engine since mid-season and have had to exceed the allowance with both drivers to ensure they have sufficient engines to make it to the end of the season in as competitive shape as possible.

Towards the back, George Russell was out-qualified by Williams team-mate Nicholas Latifi for the first time in their three years together, the Canadian taking 17th, just 0.056secs ahead of the Briton, who was 18th.

Russell said: “Just couldn’t really get the tyres or the car working. I wasn’t really feeling it. But Nicholas did a really good lap just ahead of me.

“As a team we are pretty off the pace this weekend. Only the second time in 19 races we have not been in Q2 so we need to find that pace again. We don’t really know what’s happened to the pace of the car in the last few races.”

R.E.V.E.A.L.E.D: Mike Tyson Would Have Sex Moments Before Fights To Avoid “Killing” His Opponent