The mother of a Black man fatally shot in the United States by a white former Nashville officer sobbed, screamed and knocked over a court lectern on Friday as she begged a judge not to accept a plea deal she says was struck in secret without her knowledge, a chaotic scene that briefly delayed a hearing.

Former officer Andrew Delke pleaded guilty to manslaughter and will serve a three-year prison sentence in the death of Daniel Hambrick, 25, in 2018 as part of an agreement with prosecutors.

As part of the agreement, Delke agreed not to pursue parole or appeal the case. However, Delke’s defence team said he will likely serve a year and a half in jail with standard credits.

Prosecuting police officers in the US is difficult because courts and juries tend to side with police. That may be changing. Prompted by widespread Black Lives Matter protests after the death of George Floyd in 2020, the US Congress is debating police reform proposals.

The hearing turned volatile as Hambrick’s mother, Vickie, gave a lengthy statement as family members and others applauded. Other supporters, outside the court in the hallway, banged on the door in support. Delke’s family sat on the other side of the courtroom with security guards.

“I hate you,” Vickie Hambrick screamed over and over again, while also yelling out profanities, directing some at Delke and prosecutors. 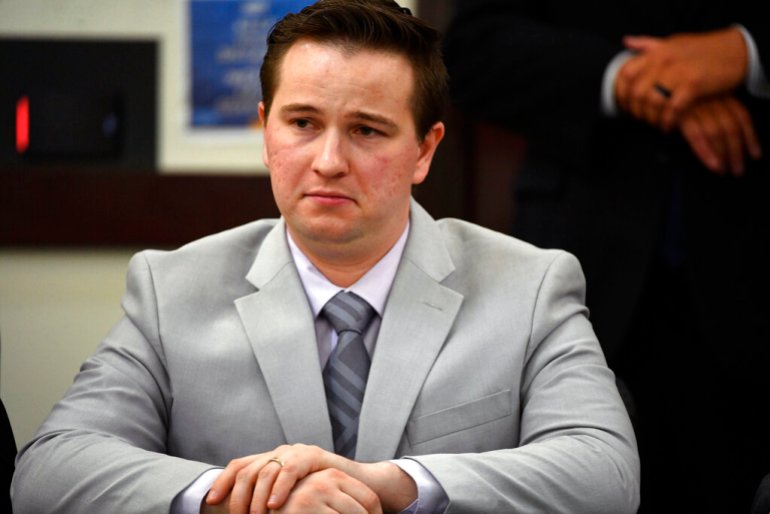 Andrew Delke listens to victim impact statements from the family of Daniel Hambrick as he pleads guilty to manslaughter as part of an agreement with prosecutors in Hambrick’s death in 2018 [Josie Norris/The Tennessean via AP]In a chaotic moment, the mother knocked over the lectern and a computer monitor, and family members rushed to her side. Delke and Judge Monte Watkins were briefly ushered out of the court.

Delke, 27, was about to face trial for a first-degree murder charge, but his lawyer announced he had would plead guilty to a reduced charge of voluntary manslaughter.

“I hope this case can contribute positively about the much-needed discussion about how police officers are trained and how we as a community want police officers to interact with citizens,” Delke said shortly after entering his plea.

His voice cracking at times, Delke apologised, saying he was “deeply sorry for the harm my actions caused”.

A group of roughly two dozen protesters gathered outside the court, chanting “no racist police” to show their opposition to Delke’s plea deal. Others wore shirts noting that police officers and white people receive lighter penalties for committing the same crimes as Black and brown people.

Hambrick’s family said they were not contacted or consulted and did not know about the plea deal until after it was done.

District Attorney Glenn Funk told reporters afterwards that he informed Hambrick’s family lawyer of the deal on Wednesday and spoke to Vickie Hambrick on Thursday. He said he has been in contact with them for three years, and knew Vickie Hambrick wanted Delke to be convicted of murder and sentenced to prison for life. 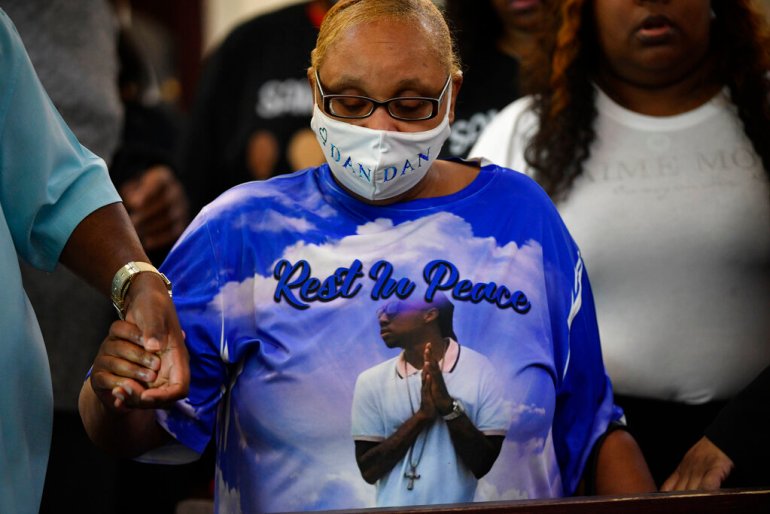 Vickie Hambrick enters the court where Andrew Delke pleaded guilty to manslaughter for killing her son Daniel Hambrick in Nashville, Tennessee [Josie Norris/The Tennessean via AP]In accepting the plea agreement, Funk said he made the decision in the best interest of the state of Tennessee. There was a “very large percentage” chance that the case would have ended in a hung jury, Funk said, which he said would have meant the emotion seen in the court on Friday “would have been played out one-hundred-fold”.

Funk called it “significant progress” that “tonight will be the first night Nashville has had a police officer in jail for shooting a Black man on duty”.

Prosecutors focused on surveillance footage that captured the shooting, in which Delke stops chasing and shoots the fleeing man.

Nashville’s Metro Council has approved a $2.25m settlement to resolve a civil lawsuit by Hambrick’s family.

For Vickie Hambrick, who is legally blind, the loss of her only child will forever haunt her.

“My son was my eyes,” Kimbrough said, reading Vickie Hambrick’s statement. “Since he’s been gone, things have not been the same and they never will be.”SOURCE: AP

PHOTOS OF BLACK FRIDAY 1904, SLAVERY AS THE DARKEST PART OF HUMAN HISTORY