A prominent military institute in the United States has failed to address institutional racism and sexism, including sexual assault, according to a report which urges the Virginia Military Institute (VMI) to be held accountable to make long-term changes.

The 145-page report (PDF), released on Tuesday and put together by independent law firm Barnes & Thornburg at the request of the State Council of Higher Education for Virginia, states that “racial slurs and jokes are not uncommon” and “contribute to an atmosphere of hostility toward minorities”.

One white cadet is quoted as saying he hears the “n-word” spoken by other white cadets up to “10 times a day from various people, that’s not an exaggeration”.

Sexual assault also is prevalent yet inadequately addressed at the VMI, the report said. A survey also found that 14 percent of female cadets reported being sexually assaulted, while 63 percent said a fellow cadet had told them that he or she was a victim of sexual assault.

The report also noted a “theme of distrust toward VMI’s ability to effectively investigate sexual assaults” reported by cadets.

“The racist and misogynistic acts and outcomes uncovered during this investigation are disturbing,” it stated. “Although VMI has no explicitly racist or sexist policies that it enforces, the facts reflect an overall racist and sexist culture.” 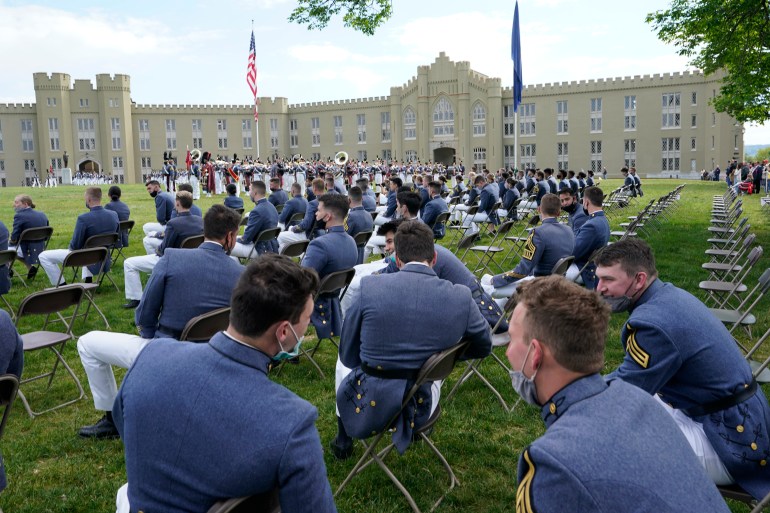 Virginia Military Institute class of 2021 watches during a change of command parade and ceremony at the school in Lexington, Virginia [File: Steve Helber/AP Photo]Similar concerns have been raised throughout the US military, which is attempting to remove racist symbols and names from its bases and deal with sexual assault in its ranks. US President Joe Biden ordered a review of the military’s sexual assault policies in January and has promised to confront the “scourge” of sexual assault in the armed forces.

VMI was founded in 1839 in Lexington, a historic town in western Virginia’s Shenandoah Valley. The school educated Generals George Patton and George Marshall. But the institution is also indelibly tied to the nation’s history of racism and sexism.

A prominent statue of Confederate General Stonewall Jackson, who taught at the school, was not taken down until December. VMI did not accept African Americans until 1968 or accept women until after a 1996 US Supreme Court ruling.

The report notes that VMI has begun to make changes, but it also says the institute “will likely follow through on its promised reforms only if it is forced to do so”.

The findings follow a months-long probe ordered by Democratic Governor Ralph Northam and other state officials after The Washington Post newspaper reported that Black cadets and alumni faced “relentless racism” at the institute.

In a statement, VMI’s first Black superintendent, retired US Army Major General Cedric T Wins, said the school has no place for racism and sexism and has developed an action plan following “deep dives” into the school’s policies. 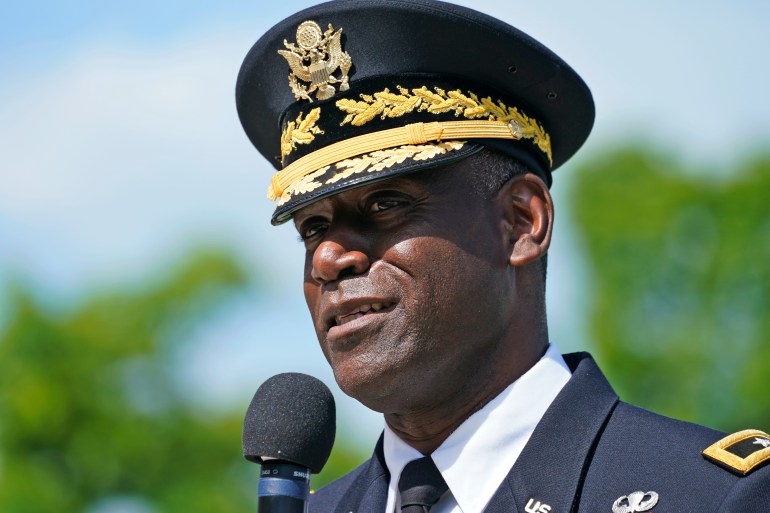 VMI Superintendent Cedric T Wins addresses the class of 2021 in Lexington, Virginia, on May 14 [File: Steve Helber/AP Photo]Wins said the report’s recommendations will be “evaluated through the lens of the VMI mission and our unique method of education, and, where appropriate, be integrated”.

“The Institute will move forward and will be better because of this chapter in our history,” he said.

In anticipation of the report’s release, VMI released a statement acknowledging incidents of racism and said the school “cannot fulfill its mission of producing educated and honorable men and women if it allows racism or bias to go unchecked”.

VMI highlighted its recent efforts to address the issues, including the creation in October of a committee focused on diversity, equity and inclusion. It also said it would soon hire its first chief diversity officer and create a cadet-led cultural awareness training programme.SOURCE: AL JAZEERA AND NEWS AGENCIES

How Napoléon’s invasion ‘revealed Egypt to the world – and to...