Joe Biden has become the first sitting president to commemorate the 1921 Tulsa Massacre – one of the worst incidents of racial violence in US history.

Mr Biden flew to Tulsa, Oklahoma, on Tuesday to mark the 100th anniversary of the attack, which claimed some 300 African-American lives.

The two days of violence, sparked by a white mob, were largely erased from history for decades.

On 31 May 1921, a group of white Americans razed the affluent and predominantly black neighbourhood of Greenwood in Tulsa.

The community – known by the moniker of “Black Wall Street” – was the country’s wealthiest African-American neighbourhood until its many homes and businesses were burned down in the riot.

In addition to the lives lost, many more black Americans were left injured or homeless.

In the years following the incident, many official records were lost or destroyed, and schools did not teach about the massacre.

Speaking in Tulsa on Tuesday, Mr Biden said: “For much too long, the history of what took place here was told in silence, cloaked in darkness.”

“My fellow Americans, this was not a riot. This was a massacre, and among the worst in our history. But not the only one.”

Less than two years after the Tulsa massacre, a white mob destroyed the black town of Rosewood in rural Florida.

On 31 May, Mr Biden issued a proclamation for a day of remembrance. 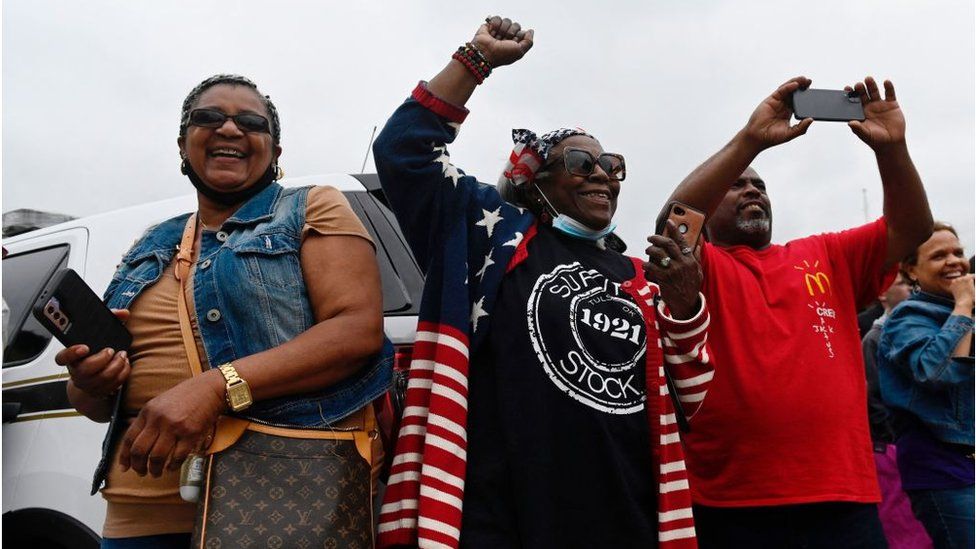 “We honour the legacy of the Greenwood community and of Black Wall Street by reaffirming our commitment to advance racial justice through the whole of our government, and working to root out systemic racism from our laws, our policies, and our hearts,” read a statement from the White House.Only three survivors of the massacre – currently aged between 101 and 107 – are still alive. Mr Biden is expected to meet them during his trip.

The president began his visit on Tuesday with a tour of the Hall of Survivors, an exhibit about the massacre at the Greenwood Cultural Center.media captionIn 1921 Tulsa saw one of the biggest race massacres in American history.

On Monday, Tulsa Mayor GT Bynum posted an apology on behalf of the city government for its failure to protect the community and “to do right by the victims”.

“While no municipal elected official in Tulsa today was alive in 1921, we are the stewards of the same government and an apology for those failures is ours to deliver,” he wrote on Facebook.

“The victims – men, women, young children – deserved better from their city, and I am sorry they didn’t receive it.”

Greenwood was a unique sight in pre-civil rights America: a prosperous community where predominantly black citizens thrived at a time of racial discrimination and segregation.

The actions of rioters reportedly erased decades of black wealth and wealth creation.

Testifying before Congress last month, one survivor – 107-year-old Viola Fletcher – said: “We lost everything that day… Greenwood represented all the best of what was possible for black people in America.”

At the start of his presidency, Mr Biden said racial justice would be one of his top causes in office.

As part of his visit to Tulsa, he is expected to tout several new housing and small business programmes the White House hopes can narrow the wealth gap between black and white Americans.

What are the programmes Biden is proposing?

The Biden administration says it will address racial discrimination in the housing market by issuing new rules on fair housing practices and curbing inequities in the home appraisal process.

Another programme involves increasing federal contracts with small, minority-owned, businesses by 50% over the next five years.

This includes a $10bn (£7bn) community revitalisation fund, which would send money to underserved neighbourhoods like Greenwood.

The plan also proposes putting $31bn toward increasing access to capital and technical assistance for small business initiatives, with a focus on “socially and economically disadvantaged” firms. It also calls for a new tax credit for private investments in affordable housing.

However, left-wing activists expressed disappointment over the president’s reluctance to cancel student loan debt, or address financial reparations for black descendants of slavery and racial violence.

How Napoléon’s invasion ‘revealed Egypt to the world – and to...